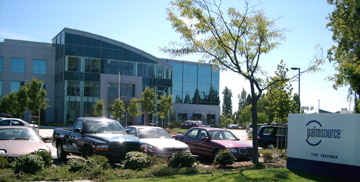 Recently, PalmSource held an open house and ribbon-cutting ceremony for its new Sunnyvale headquarters. It was an enjoyable affair, part news conference, part dedication, all wrapped in a miniature PalmSource expo, complete with strawberries and a chocolate fountain.

Press Conference and Dedication
The press conference started things off, with PalmSource CEO David Nagel mostly introducing people present, including the new member of the PalmSource board of directors, John B. Shoven. Mr. Shoven is the Charles R. Schwab Professor of Economics at Stanford University. “John brings financial knowledge and depth of expertise that are vital to PalmSource’s immediate and long-term growth,” said Eric Benhamou, chairman of the PalmSource Board of Directors in the press release. Also present were Satjiv Chahil, Robert Finocchio, Jr., and Jean Louis Gasse, all PalmSource board members.

Of course, there were also many licensees, whose names were eventually mentioned throughout the presentation. It was also announced that Samsung would renew its license for the Palm OS.

Finally, the Powered Up Award winners were announced:

The previous three award winners need little explanation for the seasoned Palm device owner likely to be reading this story, but the fourth was new enough to explain: Palm Clinical Weblog was developed by high school student An Nguyen, and was awarded Best Student Developer Solution. An’s program allows military medical students to use a Palm OS device to record their clerkship experiences without having to do entry on paper, then transcription into a computer. Instead, they write it into the Palm and HotSync it to the computer. Congratulations to Ms. Nguyen. 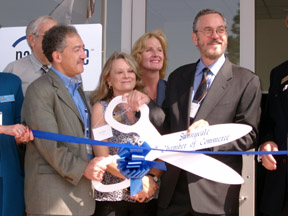 Following the press conference was the ribbon cutting ceremony, organized by the commanding and entertaining Suzi Blackman, President and CEO of the Sunnyvale Chamber of Commerce. David Nagel dutifully held the big wooden ceremonial scissors the entire time as Mrs. Blackman kept us all in line. Impromptu speeches were given and the ribbon was cut to well-orchestrated cheers.

Then it was a general free-for-all, with eating and wandering from table to table like any tradeshow. I happened to mention to someone that the worst part of these events is the noise, and the fact that you’re mixing food and carbonated beverages with close-quarters conversation. Doesn’t sound bad, until you have to suppress a burp with a beautiful woman standing less than a foot away telling you about the latest gadget. But I guess I shouldn’t complain. It’s they who should complain.

Product highlights
I did get to enjoy a closer look at a few key products, so let’s talk about them. 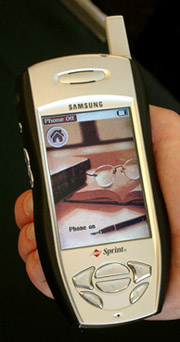 The Acer s60 was also on display, though I’m not sure why. It’s a great looking product, but it won’t be selling in the US anytime soon, according to the representative, though it is slated for the European market. Acer didn’t have a good experience here in the PC market, so it’s not really interested in coming back for now, according to the rep. Many websites claim the S60 is coming, however, so we’ll just have to wait and see.

The S60 has a 320 x 320 screen with a 33MHz Dragonball processor. It has a voice recorder and an MP3 player, both of which would not work well without a DSP to accompany the Dragonball processor. The case is different, with a wider base and nice contours all around. A wide, flat vinyl-feel flip cover completely covers the front of the unit. Performance is fast, and the icons look like the new OS 5 icons, though it runs OS 4.1. It’s a really nice unit, and I think it would do well here.

More exciting for me was my first personal experience with the AlphaSmart Dana. Having played with the AlphaSmart 3000, I was eager to see a Palm OS version. If you haven’t seen it, the Dana is a notebook-sized keyboard with a wide screen that runs the Palm OS. 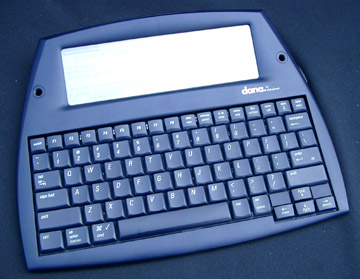 AlphaSmart’s primary customers are schools, where it sells many rugged keyboard computers for kids to learn typing and writing skills. Writers are also good customers, according to AlphaSmart, and many of them will snap up one of these babies for roadwork, as well as for casual writing. I’m pretty sure I will. Chief benefits would be lack of a complex operating system and no lap-heating tendencies found in common laptops. It has a backlit 560 x 160 monochrome screen, two SD slots (something all Palm OS devices should have), two USB, and one IrDA port. It comes with a rechargeable battery pack that can be replaced by three AA batteries in a pinch. 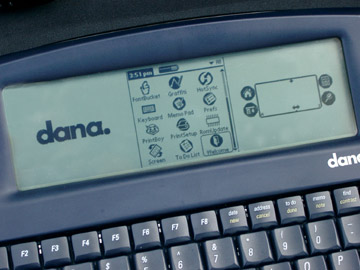 The wide screen is great for word processing, and the unit will likely get a writer through many more hours of writing than the average notebook. The display can also be rotated into columnar format. It’s surprisingly easy to hold like a tablet and write this way. The Graffiti area can be moved around the screen in either format; it was reprogrammed from the HandEra Graffiti area, according to representatives. It also comes with AlphaWord, a modified version of the rightfully popular WordSmith word processor. All the traditional Palm OS apps are onboard, and most programs written for the Palm OS will work with the Dana. A store version will include Quickoffice from CES, and is expected to retail for US$399. It’s a niche market product, but I’m extremely excited about it for my own uses.

Kyocera was also there showing their 7135 Smartphone. This handsome device is eagerly awaited.

Symbol was showing their line of Palm OS devices, little changed. Apparently for the vertical application it serves, there’s little need for change. They’re ruggedized Palm OS devices with laser scanners and the higher-end devices have 802.11b radios. For basic data collection, what else do you need? Captra Software, for one, I’m sure they’d say. The latest version works with QuickBooks to give Intuit’s bookkeeping program a better inventory control system. It looks like an impressive low-cost solution for small businesses. 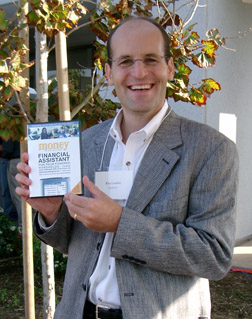 Ken Landau of Landware was showing off his new Money Magazine Financial Assistant, as well as Pocket Quicken, Zagat, and Wine Enthusiast Guide. It’s always good to see Ken at these shows. Like me and many other Palm OS regulars, he loves the spirit of camaraderie that surrounds the Palm community; it’s a spirit that shines through him particularly brightly.

Kinoma had an interesting multimedia offering, supported by a couple vendors. eNature showed its interactive wildlife guide written on the Kinoma engine. The demo I saw was a bird watchers guide, which included pictures, facts, and even recordings of each bird in its library. On the portrait screen on a Sony NR70V, it was impressive indeed. A company called Discreet showed its video encoder for the Kinoma Player for Palm OS, and Tribeworks showed their extensive Kinoma-based Multimedia Authoring Environment for Palm OS. Very impressive stuff. 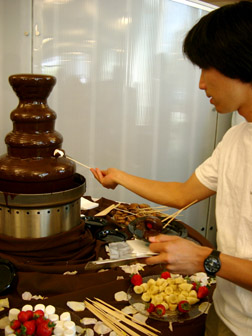 There were quite a few other companies in attendance, but these were the highlights for me. It was a fun day had by all. The new PalmSource headquarters are nice, a little more understated than the old 3Com campus. Palm’s headquarters are likewise less grandiose. It’s the right look for the times.

Here’s hoping for better times with the upcoming products. I’m looking forward to having lots to review these coming months. Now if I could just figure out how to get myself one of these chocolate fountains.