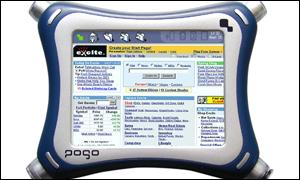 A small British technology is launching a gadget that it says could make third-generation networks obsolete before they are switched on.

Pogo Technology says its mobile device can browse the web at speeds comparable to those achievable by computer modems.

As well as being a web browser, the Pogo handheld can also be used to send and receive e-mail, serve as a mobile phone and play MP3 music files.

The Pogo should go on sale before the end of the year.

All mobile phone operators are keen to find ways to get back some of the huge amounts of cash they have sunk into futuristic third-generation (3G) networks.

These future networks handle data far better than today’s mobile networks and make it possible to offer customers all manner of exotic services that give them access to music tracks, video clips and interactive web tools.

But Pogo Technology claims its gadget removes the need for the 3G networks.

The device, which is roughly the same size and weight as a Palm handheld, routes all its requests for data via interim servers that sit between the mobile network and the larger internet.

These servers compress the pages being requested and sends them onto the device which reassembles them.

Tim Critchley, one of the founders of Pogo Technology, said this system means data flies around at the equivalent of 50kbps – almost the same speed as the fastest computer modems.

Because it does a good job of letting people browse the web, the Pogo does not have a Wap browser on it.

The funky looking Pogo is aimed squarely at young consumers, particularly those who invest a lot of time, money and effort to modify their existing mobile phone.

People who buy a gadget tend to do more with it, said Tim Critchley.

“Our research has shown that when consumers handed over their own money, they used it a lot,” he said.

“But when they were given it by a firm and were told to use it, they usually put it in a draw after a week and forget about it.”

As well as being a web browser and standard mobile phone, the Pogo has a slot for a memory card that could hold MP3 files. Text can be written via a stylus and an on-screen keyboard.

Finished versions of the Pogo will run for 100 hours of standby time and between four and six hours of talk or music-listening time.

Almost all handheld computers have to be regularly connected to a desktop computer to synchronise the information they hold with what is on the parent machine.

By contrast the data held on a Pogo is co-ordinated via an owners web account that they get when they buy the device. Changes made to the information held in this web account, which could include e-mail messages, MP3 files or voicemails, will be picked up by the Pogo when it is next used.

Mr Critchley said the gadget should be in a few select shops in time for Christmas and will be widely available from January 2002. It is expected to retail for about 299.

The Pogo company is currently finalising deals to distribute the Pogo in high-street retailers and cementing its links with mobile phone networks.