The HTC One remix is a midrange device offering something above midrange performance. The display and build are real plusses, but it’s a bit too big to be a mini, and the camera is mediocre.

The HTC One remix is a lesser smartphone in both the literal and figurative sense. It’s smaller than its namesake, the HTC One (M8), and in keeping with the recent trend of “mini” smartphones, it’s less powerful, too. 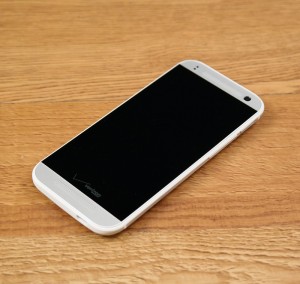 But considering the HTC One (M8) is arguably the best of the current Android flagships, “lesser and smaller” are relative terms. The HTC One remix is bigger than the iPhone 5s, and its specs are only a step below the latest and greatest. In fact, it would have been tops had it been released in 2013.

The HTC One remix is really an HTC One Mini 2, just rebranded for Verizon. As of this writing, it costs $50 on contract, $450 off contract.

The HTC One (M8) is one of the best looking smartphones available, thanks to its metal unibody design, rounded edges, and sloped back. The HTC One remix retains its bigger brother’s shape, but ditches the metal for polycarbonate edging that also cuts across the back, dividing the rear panel into three distinct pieces.

This doesn’t make the remix an ugly smartphone, but it’s less attractive than the One (M8). Although the move may have been less about cost cutting and more about function, the One remix is clearly easier to hold, and not just because it’s smaller. The polycarbonate sides provide a reasonable grip, making the HTC One remix slightly less slippery than the One (M8).

Port and button selection is typical, with a power button and 3.5mm audio jack on the top, along with a microUSB input on the bottom.

The nanoSIM slot rests on one side, while a volume rocker and microSD card slot reside on the other. Both the SIM and SD card slot can only be accessed via a pin-hole press, and HTC is good enough to include a pin accessory with the smartphone. Considering many smartphones don’t support SD cards, and those that do hide the slot under the back panel, we won’t complain too loudly about the awkward access. On top of that, cloud storage is so ubiquitous that many users will get by without an SD card.

We will complain about the lack of labels, however. The SIM and SD card slots are about the same size, but neither is identified. It’s too easy to accidently open the SIM when looking to access the SD, and accidently mess up the connection.

The 13-megapixel rear shooter sits on the upper back, centered next to the LED flash. The battery is sealed in, and not user accessible.

The 4.5-inch display (corner to corner) dominates the front, along with a 5-megapixel front shooter on the top right, and an ambient slight sensor on the top left. Two “BoomSound” speakers sit above and below the display.

The HTC One remix measures 5.4 x 2.6 x 0.4 inches and weighs 0.3 pounds, making it just as tall as many larger-screen devices. This gives the HTC One remix a thinner rectangular shape than seems necessary, which is mostly due to the large display bezel on the bottom edge. Personally, I feel this also makes it easier to hold, though those who prefer a true “mini” phone should physically test out the One remix to see if it fits that particular billing.

At 0.3 pounds, it’s just as light as anything else on the market, but it feels very solid. There is absolutely no creak or flex, and the HTC One remix could likely survive a drop or two, or three or four.

At a certain point though, ppi becomes moot, and the HTC One remix has an excellent display, with superb contrast, vibrant colors, and acceptable brightness. The best part is that it shrugs off glare especially well. Users will have no problem reading from the display in direct sunlight.

For those concerned that the display is too small, 4.5 inches is more than enough for a viable smartphone experience. As previously stated, it’s a half inch larger than the most popular single smartphone in the world and everything scales well so things never feel cramped.

If there is a complaint, it’s with Android, which now has a set of persistent softkeys (back, home, recent apps) taking up screen real estate. Certain apps like YouTube can enter a true full-screen mode, but that’s it. This is no improvement of the hard and softkeys Android smartphones used to sport on the bottom bezel. This setup would have worked especially well on the HTC One remix, considering the ample space under the display.

Smartphone (and tablet, and notebook) speakers are generally junk, or emit junk sound. By that low standard, HTC’s BoomSound deliver on the promise of “impressively rich audio.” Rather than praise the BoomSound speakers for their output, it’s probably enough to describe them as the best of a bad bunch. No one will use them to regularly enjoy music, but they’ll work very well for sharing videos and other multimedia content. That they are front-facing is also a plus, as they run no risk of being covered by a case.